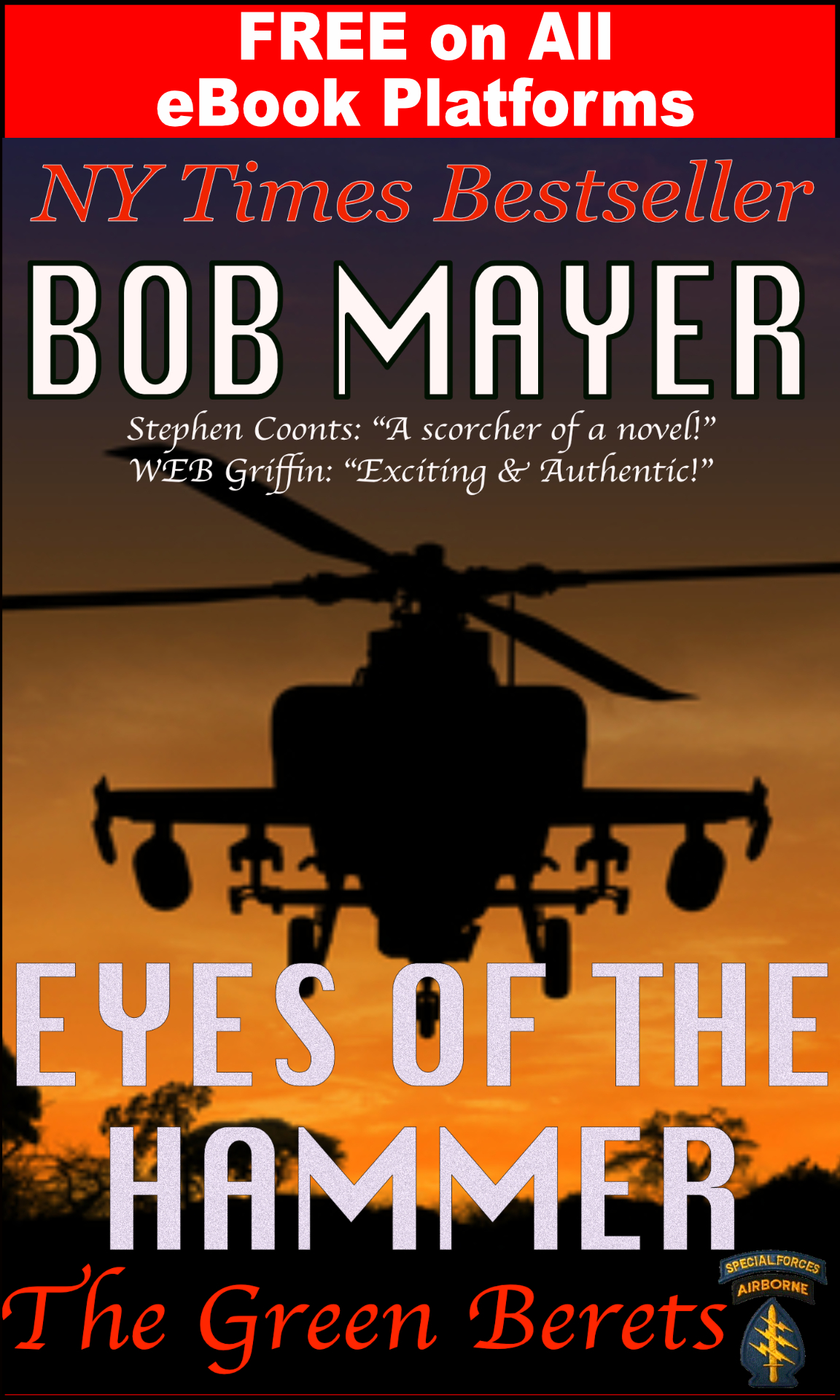 I do ask if you do download and enjoy a free or discounted book, please consider leaving a review! Thanks!

“Exciting and authentic! Author Mayer, a Green Beret himself, gave me a vivid look at the world of the Army’s Special Forces. His portrayal of Green Beret operations and techniques takes you deep into the world of Special Operations.” W.E.B. Griffin.

A US Special Forces team lead by Green Beret Dave Riley is on a top secret mission to take down drug traffickers in Colombia, but while doing so they are faced with betrayal by their own government.

The team is carrying sterilized weapons and unmarked uniforms and the operation is “off the books.”

Of course, nothing is as it seems, especially once the CIA gets involved. Throw in an Israeli mercenary and betrayal, and Dave Riley and his team soon find themselves wondering what the real mission is and will they become collateral damage from all the double-dealing going on back in Washington.

Eyes of the Hammer is the first book in the bestselling Green Beret Series.

Stephen Coonts: “A scorcher of a novel!”

Get it now on:
Amazon

The story of how the Donner Party disintegrated and all the mistakes made leading up to the final disaster:   AMAZON

The Green Beret Guide to Seven Great Disasters is available for pre-order: AMAZON

The 1918 Pandemic killed over 50 million worldwide. Another pandemic was inevitable, yet how many people and organizations prepared for it? Why don’t we learn from history?

This series is about disasters and how to avoid them, mitigate their effects and learn from them. As you will see studying seven significant events in each book, they didn’t just happen, and the people and organizations involved weren’t helpless victims. Taking the attitude shit happens is potentially fatal. It ignores painful and tragic lessons from the past. If we’re going to make the deaths and suffering of victims to mean anything, we must learn from them. That is the “gift of failure.”

The bottom line is we can predict and prevent many disasters because every disaster involving human interaction has a man-made factor, a cascade event, involved. In other words, we have control over whether shit happens. But it means changing a complacent mindset, getting rid of delusional thinking, and viewing the world around us in a different way.

This book not only dissects these seven disasters, it outlines ways for individuals and organizations to avoid future disasters.

I do ask if you do download and enjoy a free or discounted book, please consider leaving a review! Thanks!

The fifth Will Kane book. Publication date, June 2021 (but most likely will be released earlier than that).

Will Kane has faced down the NVA, the IRA, the CIA and the Mafia.
But now he faces the most intense challenge of his life.
Someone is trafficking children in New York City.
Someone who has connections to very powerful people who want this kept very secret.

Kane’s investigation is getting too close.
But he can’t back off; not when children are involved.

It’s war.
And there will be no quarter taken or given.

“Fans of Jack Reacher, look no further. By the author with Jack Reacher’s background, Will Kane rings with authenticity.”

Walking side-by-side with death
The devil mocks their every step, ooh
The snow drives back the foot that’s slow
The dogs of doom are howling more

I welcome you to this Reader’s Guide. I put this together so that you can peruse all my titles, see books in series orders, and have convenient links to the platforms the books are available on. I’ve also included previously unpublished material such as the opening to my next book, New York Minute; a short story featuring characters from the Cellar; a complete Time Patrol mission of one character; a flashback cut from New York Minute; excerpts from my survival book and a complete event from Stuff Doesn’t Just Happen: The Gift of Failure covering the Titanic, and more

Books are listed in order in their series with a brief note from me on each book. Connections between books and series are explained, along with links where the books can be found—just click on the appropriate symbol. For the Audible symbol, you’re taken to the Amazon Audible Page, but you can also find those titles directly on Audible.

Several books are free so you can get a feel: Eyes of the Hammer and Duty.

Books that have only Amazon and Audible links are enrolled in Kindle Unlimited and can be borrowed on Amazon. If you’re enrolled in Amazon Prime you can also borrow those books.

Get it now on:
Amazon
Apple
Barnes & Noble
Kobo
Google

I do ask if you do download a free or discounted book, please consider leaving a review! Thanks and enjoy!

An epic series in the vein of HBO’s Rome, following two ordinary men through extraordinary times; from West Point, through the Mexican War, and into the Civil War.

Elijah Cord and Lucius Rumble swore oaths, both personal and professional. They were fighting for country, for a way of life and for family. They and their West Point classmates carried more than rifles and sabers into battle. They had friendships, memories, children and wives. They had innocence lost, promises broken and glory found.

Duty, Honor, Country is history told epic and personal so we can understand what happened, but more importantly feel the heart-wrenching clash of duty, honor, country and loyalty. And realize that sometimes, the people who changed history, weren’t recorded by it.

The story starts in 1840, in Benny Havens tavern, just outside post limits of the United States Military Academy. William Tecumseh Sherman, Cord, and Benny Havens’ daughter come together in a crucible of honor and loyalty. On post, in the West Point stables, Ulysses S. Grant and Rumble are preparing to saddle the Hell-Beast, a horse with which Grant would eventually set an academy record. On this day, all make fateful decisions that will change the course of their lives and history.

We follow these men forward to the eve of the Mexican War, tracing their steps at West Point and ranging to a plantation at Natchez on the Mississippi, meeting Major Robert E. Lee at Arlington, and go to Charleston, SC. We travel aboard the USS Somers and the US Navy mutiny that led to the founding of the Naval Academy at Annapolis.

We end with Grant and Rumble in New Orleans, preparing to sail to Mexico and war, and Cord with Kit Carson and Fremont at Pilot Peak in Utah during his great expedition west.

This is book 1 in the Duty, Honor, Country series. (Formerly titled West Point to Mexico)

“Will leave you spellbound. Mayer’s long suit is detail, giving the reader an in-depth view of the inner workings of the Army and West Point.” Book News 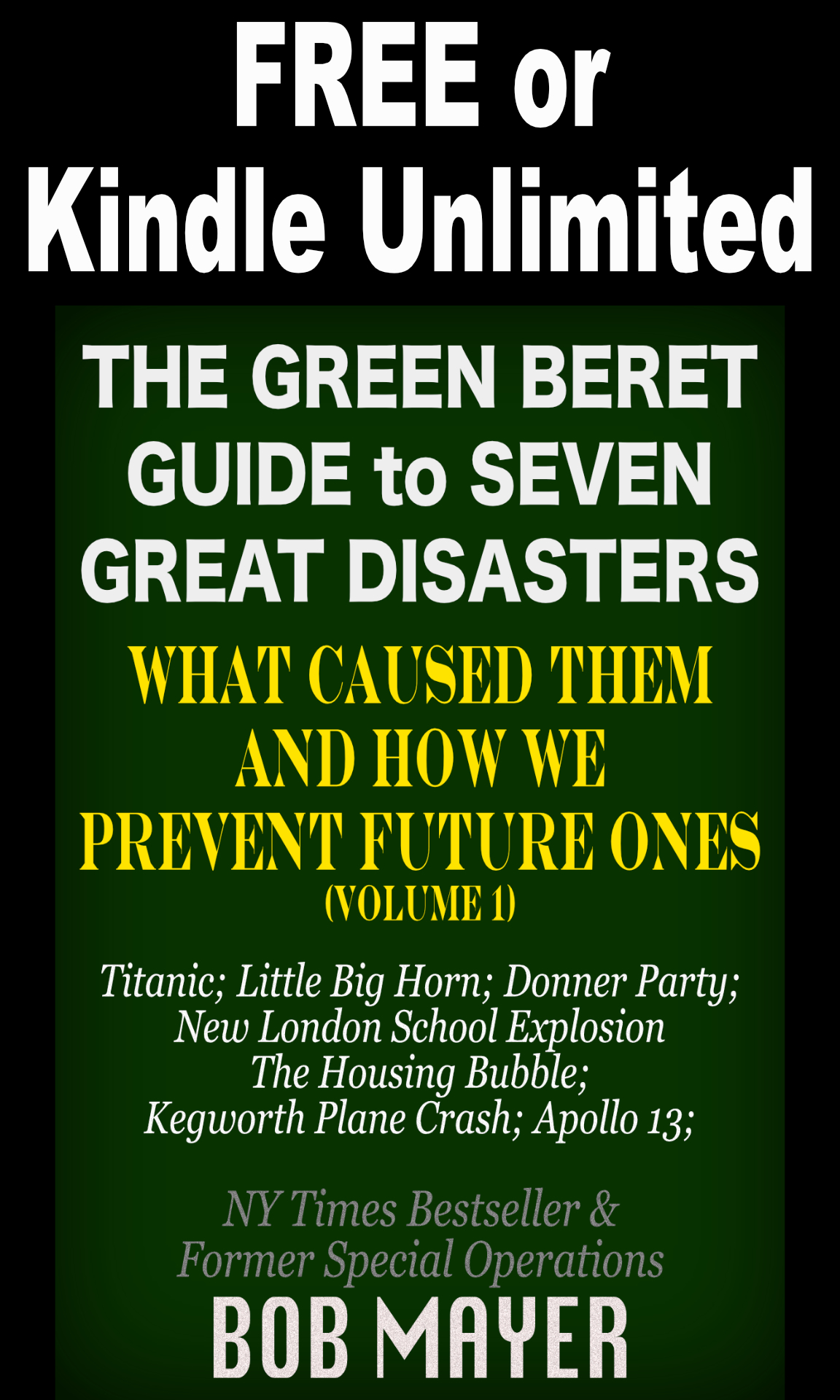 Get them now on:
Amazon 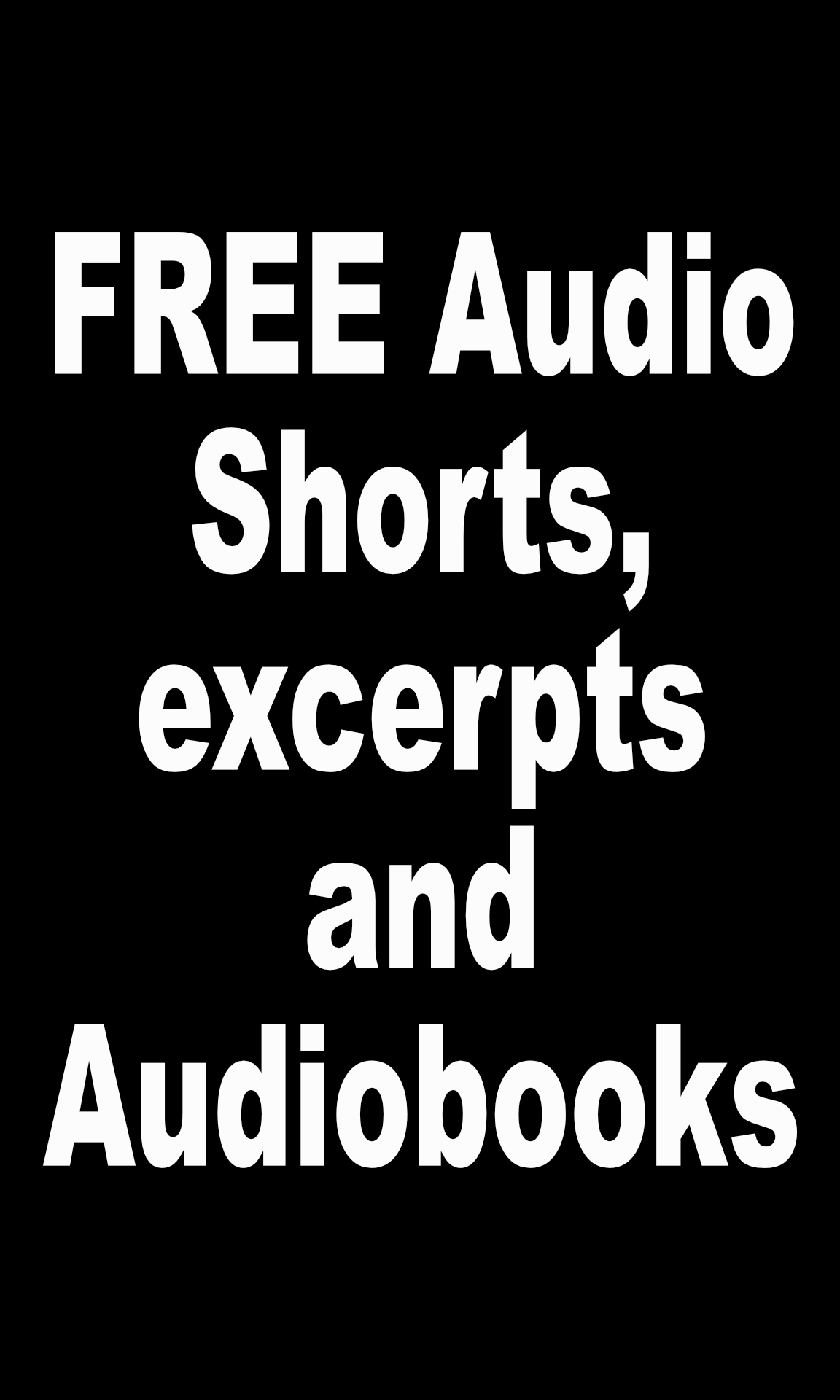 These shorts and excerpts are on Soundcloud. The missions are complete short stories, each being one of six missions in the book they’re from.  My audible page is HERE

4 July 1863 – Gettysburg. What if the Union had counteratteacked? Complete mission from Independence Day (Time Patrol)

15 March 44 BC. What if Caesar Wasn’t Assassinated? Complete mission from Ides of March (Time Patrol)

The rest are lower on this page. Enjoy!

All samples are via Soundcloud. My audiobooks are available (click HERE) on Audible. If you are not a member of Audible, you can download one of my books for free and test the program for a month. If you don’t want to participate, you simply cancel your membership. Below are free samples. Some are complete Time Patrol missions. Other are the opening to various books. I also give free Audible download codes for my books to my Facebook A-Team and via my newsletter on a monthly basis, so please join or sign up.

Eyes of the Hammer (Green Berets)

Eagle’s Mission from Ides of March