Trump VS Hillary: A Possibility Analysis

(Author’s note: Hannah, the head of the Cellar, must constantly assess the present situation and make decisions for the country’s future. The Time Patrol, headquartered in the Possibility Palace, is responsible for keeping our past intact. It has the greatest repository of historical data; but now they have a new member, Lara, who has a special talent. Able to comprehend and analyze all that historical data, summarizing it, but also able to ‘see’ some specific events in the future that will occur unless interdicted. This is the first report she has sent to Hannah.)

The scroll came to the Cellar in a tube packed in a fireproof box within a titanium-lined briefcase with a built in self-destruct that was big enough to destroy not only the contents, but also anyone within fifty feet. It had been hand carried by Neeley from the Possibility Palace, through the Gate into the secure room six hundred feet below the Metropolitan Museum of Art then via an unmarked jet to Andrews Air Force Base, and finally a helicopter to the roof of the National Security Agency. Just outside this office, deep underneath that building, Neeley passed it on to Hannah, the only one who had the clearance and codes to open briefcase.

Nero, her predecessor, had received only one analysis and prediction from the Time Patrol years ago, but he hadn’t acted on it, to his great regret. This was the first one brought to Hannah, who, up until a year ago, had not even known the Time Patrol existed. The only secret Nero had kept from her. Hannah had spent considerable time over this past year pondering the reasoning behind that secret. She still didn’t have an answer.

She unrolled the scroll and reached for her heavy reading glasses.

The hand-written parchment was printed in what appeared to be a child’s hand, so unlike the printed out Analyses in the font Hannah preferred.

But this was an outlier. Not just an Analysis of the present, but one that also projected into the future based on the present and the past and something else, some X factor seeing the possible future that Nero had been so leery of, he’d chosen inaction over action.

She unrolled the scroll and reached for her heavy reading glasses.

It was, as she had anticipated, what Nero would have called a Coventry Analysis. A lose/lose where any choice will be bad but one would be less bad.

At least that’s what Hannah hoped.

For whoever Neely gives this to (she’s cool by the way; tip her?)

The Donald as President: Not cray-cray like people think. Anyone can see he’s studied Reagan and especially Nixon’s comeback in ’68. He’ll break open the vault for corporations and the money people. The one percenters who use the country as their own personal piggy bank will be thrilled. Lots of massive building projects, which will be the result of corrupt, bidding practices, the work going to those with connections. Too much of the money will line pockets, the work will be shoddy and a lot never finished. We’ll be able to see it in the bits and pieces of the wall, but never a complete wall. Not that the wall is gonna do anything anyway. Aint the solution for the problem. But it’s the technique to divert attention from the real problems, so actually a solution of sorts and that’s his forte.

Trickle down means piss down economics. The people at the bottom end up wet and smelly. I should say wetter and smellier.

The Donald has mastered the art of leveraging, not dealing. Expect this to eventually come to a massive government bailout of all those who lined their pockets around the end of year two, beginning of year three. Too big to fail and Trump will insure they’ve gotten Federal backing: Atlantic City on a national scale. Bankruptcies don’t matter to this guy, because while his businesses failed, he succeeded.

Bottom line based on similar types in the past: A high Mach—Machiavellian, which means cunning, unscrupulous, scheming and focused totally on himself. His followers will scream, but he’ll be able to direct them to others as the culprit for one term, then get out of Dodge.

Never admits he’s wrong. Never. He can sort of, but not specifically. Because he can’t comprehend that. Easily poked in that area and will respond, but the people worried about the nuke button don’t understand that you, the person reading this analysis, or maybe whoever sat at your desk before you, don’t know how old you are, come by and say hi sometimes?, took the button away from Nixon near his end. He was drunk and pretty much bouncing off the walls every day. Similar to Trump every day except he doesn’t drink, so I see that nuclear ‘football’ being carried around by that flunky actually having a football in it. Probably made of Nerf. Isn’t there someone named the Keep—cool name, I like it—in the White House who will sit on his head if he tries to do anything really whackadoodle? Checks and balances, right?

Foreign policy: he hates traveling. Even Air Force One won’t satisfy him. He’ll ignore a lot unless they piss him off or he sees an angle; he’ll try to get the military to do illegal things which will stall out before they get done, cause most of those military people are pretty serious folks. Actually won’t be as bad as George Jr. We’re still in that war. We won’t be getting out any time soon. The military-industrial complex, the one I Like Ike talked about, is already expending sufficient ordnance for profit and making enough foreign sales; even they understand you can only fight so many wars at a time. Enough million-dollar bombs are being dropped for them right now.

In sum a narcissistic, who cares only about one thing: Donald.

Except for my prediction event. Take that event for what it’s worth, which I don’t even know. I just SAW it. Don’t ask me how, but its why they got me in this room.

Hillary as President: Why is she called by her first name? Oh yeah, Bill. The Clinton. Which is the problem. She has the smarts; he has the charisma. Mush ‘em together you got something. But not gonna mush. Mesh? Whatever.

Very smart, okay, repeating myself, my hand hurts writing this, why don’t they have computers and cell phones here, maybe I could text? Ha—email; let’s not get into that given the topic. Anyway. Yeah. Smart, savvy, manipulative, but all that is trumped—sorry had to use it somewhere—by ambition.

History says ambition is the grossest part of success, especially when fueled by pure drive. Ambition driven by idealism sounds neat, but the catch is the notion that she thinks she’s the only who can do it; stomped on idealistic Sanders because it was more about her than the ideal. She’s still pissed that ’08 should have been hers and not O’s. He shoulda waited his turn; but it is what it is.

O really shouldna cracked that joke at that Dinner about Donald. That’s what started this cluster-frak. Moms told me I shouldn’t cuss, so they use BSG terms, whatever. Seriously. Donald couldn’t take a single joke; he had to run for President to get back at O.

But no matter. Hillary will be four more years of the last eight.

Except worse. Trump’s supporters will have an ideological meltdown, certain the election was rigged. He won’t go quietly into the night ‘cause—well see above. Never loses. He’s excellent at turning losses into winning; that’s called leverage, see above. He’ll leverage a loss better than a win; a better platform.

Hillary kinda knows that he and his people will react that way, but just as no one expected him to get this far, they have no clue how bad it’s going to get. We got people shooting each other now—notice how there are no more ‘assault rifles’ they’re ‘long guns’ now? Word spin. Say it enough and they’ll believe it. ‘Crooked’ was the start. ‘Rigged’ will evolve into ‘cheating’ into ‘treason’. Gonna be devastating. Seriously. I could point to history, but take my word on this.

Foreign policy: yeah she knows what she’s doing better than anyone who has ever had the office. Except when your house is on fire, who gives a crap about the house across the street being on fire or even shooting at you?

Riots and massive work stoppages, truckers refusing to drive produce, workers refusing to lay cement foundations. The ones who actually make America great and have been screwed over so long they grabbed onto a billionaire asshat (is that a cuss word?) as their savior. Basically, the backbone of the country deciding that it is all rigged against them (it is) and taking this opportunity to bring the country to its knees cause the 1 percenters can only fly above things for so long before they have to land and refuel. That’s what those rich people don’t get. They need that base of the pyramid in order for them to be at the pinnacle; otherwise, they’re in the dirt too. Sand. Poop. Whatever.

Again, except for my prediction event. Take that one for what it’s worth too. It’s what I SAW. Of course, only one can be elected so both events won’t happen. Guess your job is to make neither?

Pick your poison. Collapses and ruin on levels too high to sustain no matter who wins. Course there are other world problems just as big, if you wanna know. Course you know already them, don’t you? Do you?

I hope so. I really, really hope so.

Glad I aint you. Not too happy being me though.
Lara

Hannah’s hands were shaking at she picked up the next scroll. She began to read . . .

(Author’s note: This Analysis and the prediction events are a part of Nine Eleven (Time Patrol) to be published on 9-11-2016. This is Lara’s first analysis to Hannah. There will be more.)

A balcony is part of the great spiral descending into the massive, open Pit of the Possibility Palace. The wide spiral track ran counter-clockwise around the outside of the pit, descending into a vague, distant bottom almost a mile down; the beginning of recorded history.

The descending balcony was of varying widths, depending on the importance of the spot in the timeline and the number of Time Patrol analysts assigned to that era. The analysts sat at bland grey desks, which appeared to be Government Issue, circa 1950. There were no computers, no phones. There were thousands and thousands of filing cabinets stacked along the outer edge, against the stonewall. There were occasional zip lines going across and ladders here and there, going from one level to another, making direct connections between certain eras, without having to go all the way around. An intricate series of pneumatic tubes shot small containers with paper messages to and fro. All this to keep tabs on history and look for any possible anomalies. 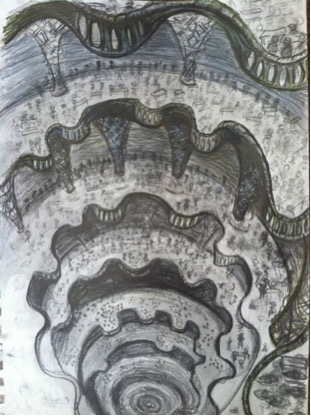